This week is all about donuts, souvlakis and burgers – healthy ha?

First thing to note is that All Day Donuts is only open Friday – Sunday. I didn’t realise this, and went down there on a Wednesday hanging for donuts only to be disappointed (by my own doing of course. Note to self, always check open hours).
When I finally made it back last week, I was so excited to get into
some great donuts. I ended up buying the strawberry cheesecake donut, the donut filled with passionfruit custard and coated in coffee icing and finally the ring donut coated in chocolate icing and sprinkled with mint rubble.
I love chocolate, so I couldn’t wait to get into the ring donut and I have to say, I was disappointed. I looked so much better than it tasted. The biggest let down for me was that it was quite dry. Each to their own, but I love a soft doughie donut, and this wasn’t that.
However they redeemed themselves with the two filled donuts, especially the strawberry cheesecake. I’m not usually into anything strawberry, but this donut was delicious! It was soft and doughie, the icing had set beautifully and the custard centre was just perfect.
It’s definitely worth the trip to Brunswick, but my tip is to get into their custard donuts, you won’t regret it.

I pretty much think that anything George Calombaris touches turns to gold. I liked St.Katherines (RIP) and I love Hellenic Republic (I’ve been there more times than I can count), so as the pattern goes, i’m obsessed with Jimmy Grants. In one of my earlier blog posts, I mentioned that I spent 6 weeks on bed rest at Freemasons hospital in East Melbourne, which I just a short walk from Jimmy Grants in Fitzroy. When ever I couldn’t handle the hospital food, my husband would make the dash up Smith Street to get me some Jimmys, and damn did it hit the spot. I’ll even go as far as saying these are the best souvlakis I’ve had outside of Greece. They are without doubt the closest thing I’ve tasted to the amazing Souvlakis I had in Greece a couple of years back.

My favourite is the Bonegilla because it’s just the perfect mix of chicken, lamb, chips and aioli. But you can’t go to Jimmy’s without getting into the chips with garlic oil, feta and oregano (I’m salivating just thinking about them) or that amazing grain salad they brought across from Hellenic Republic. Then you have to wash it all down with Jimmy’s Wheel. Since i’m already making some big claims, I have to say this is one of my favourite wagon wheels in Melbourne! They have a smaller wheel called the Jim Jam available at the Emporium store, but it has nothing on the original Jimmy’s Wheel. It’s just amazing!

If you haven’t been there yet, seriously what the hell are you waiting for? This isn’t the kind of souvi that you hit after a big night out, this is the kind you want to enjoy, sober! Who would have thought that could be done! 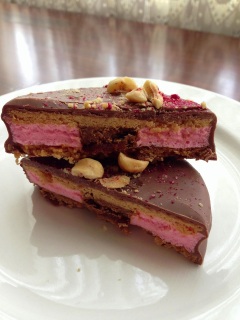 My first warning is that this place gets insanely busy! We got there at 6pm on a Friday night and literally just missed the rush. Having said that ,their service is exceptionally quick. Our entire order was done within 10 minutes and the place was full of people.
8bit is similar to a lot of other burger places opening up at the moment in that it has an American flair to it – burgers, hotdogs, fried chicken, chips and shakes.
We ordered two burgers – the Altered Beast and the After Burner, plus potato gems and beer battered fries. Oh and a peanut butter shake to wash it all down (if it’s cheat night, why go half way? If I’m blowing the diet, I’m going to do a good job of it.) Overall our burgers were pretty good. I’m not going to go as far as saying they were the best I’ve ever had, but they were good. The chips were also pretty tasty, but I have to say the potato gems were a bit of a let down (I know, controversial), quite a few people recommended them, so I was really looking forward to them, but, hmmm, average.

Overall I didn’t mind 8Bit, the burgers were good and If I’m in the area I’ll pop in again.