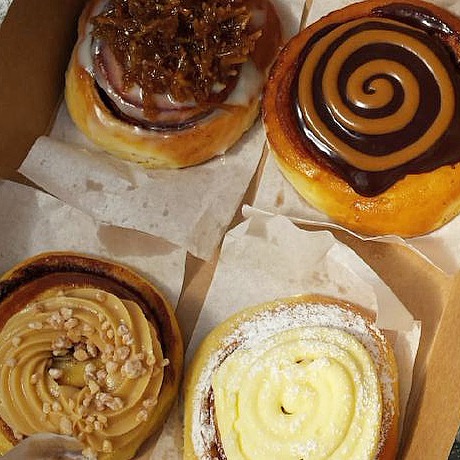 Anyone who is anyone in Melbourne, well at least the foodie type, is talking about Pop Up Scroll in Collingwood. I’ve always been a fan of the good old cinnamon scroll, but to be honest it has been quite a while since I had one. The current talk is that scrolls are the new donut or macaron or cupcake, you get my drift? It’s just a matter of time before little scroll shops are popping up all over Melbourne.

So I got my butt into gear and paid this little place a visit.  I walked into the bright, fresh and sweet smelling little shop and was greeted by the loveliest staff. Then I caught a glimpse of those scrolls and it was love at first sight. So instead of getting one scroll on the run, I picked up four, yep four. I know what you’re thinking, did you seriously eat four scrolls? Well I kinda shared them, so you can make of that what you will (all I’m going to say is that maybe I skipped dinner after this visit). They all looked so incredibly delicious, how was I supposed to only pick one?

I picked up an original cinnamon scroll with cream cheese frosting, a scroll with a coconut and white chocolate topping, another with peanut butter and banana frosting, and finally one with chocolate and caramel icing. All of them were absolutely delicious, but that original scroll with cream cheese frosting was amazing! So simple and tasty. The basic scroll is so fluffy and moist (is that even possible for a scroll?), it wasn’t dry like so many other scrolls you can pick up, it was just perfect.

The other flavours were just as good. They would be perfect for dessert as opposed to your standard morning/afternoon tea. They were sweet, rich and sticky, perfect for any sweet tooth that needs to be satisfied.

Overall I was really impressed, damn they can make a scroll! If this is anything to go by,  I’m looking forward to 2015, the year of the scroll. I can’t get that original cinnamon scroll out of my mind, mmmmmmm.

It has been years since we visited the Boathouse, so we decided to have a late Sunday lunch there last week with some friends.

For anyone that hasn’t been there before, it is situated on the banks of the Marribyrnong river, in what looks like a shed from street level, but is  beautifully fit out inside, making for a warm and relaxed dining environment.

Given it was a Sunday and we weren’t in any rush, we decided to start off with a few items of the Mezze menu. We picked the following items:

All were good, but the stand out for me was the pumpkin arancini. They were small and delicate but really tasty. In a way it was a shame that they were so small because I just wanted  to eat more and more of them. But they were mezze and we needed to keep some space for our mains.

For my main I ordered the swordfish (Swordfish w chickpeas, raisins, cauliflower, almond & herb oil) and I was quite impressed. The fish was cooked perfectly, still very moist and tender, not dry as is often the case with fish and it was perfectly complemented by the cauliflower and oils.

Overall lunch was a success, the Boathouse is the good spot for a casual gathering with friends. 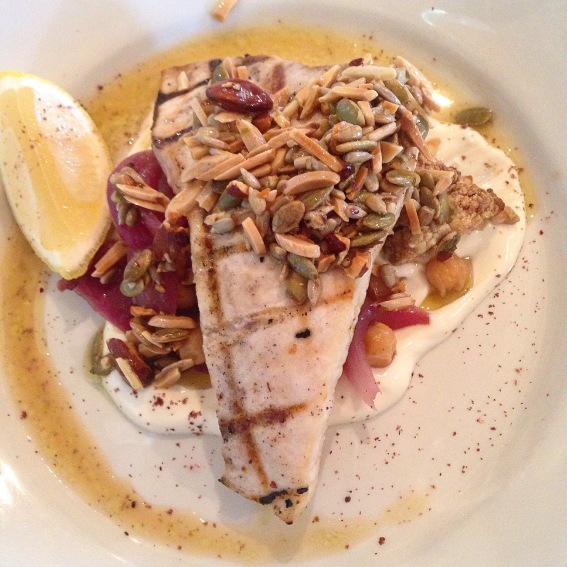