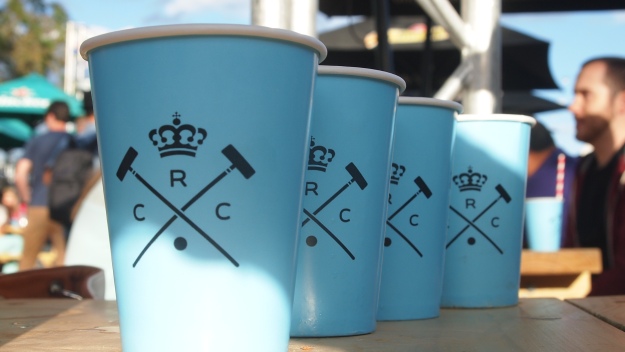 I finally made it!! After days of watching these amazing post fill my Instagram feed and suffering from serious food envy, the stars aligned and we had a free night to visit the Royal Croquet Club.

The lucky night was Australia Day eve and the place was buzzing. Luckily for us, we met some great friends there, who fortunately, are much more organised than us and got there early enough to snag a table right in front of the big screen, so we also got to enjoy some great food and the tennis. Now I know the whole point of this little shin dig is to enjoy the croquet, and yes the croquet is quite a draw card, but with the Kyrgios/Seppi game in action, we didn’t want to leave our table, unless there was food and drink involved. Luckily for us, there was lots of both.

The husband and I split up so that we could speed up the food acquiring process, so he hit Miss Chu and I lined up at DOC. 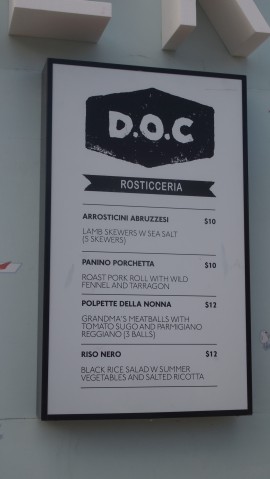 The first thing that must be said is just how quick the service was at DOC. The queue moved so quickly, I had lined up, ordered and received my food in just over 5 minutes. I ordered the Arrosticini Abruzzesi (lamb skewers with sea salt) and the Panino Porchetta (roast pork roll with wild fennel and tarragon) and both were pretty good. The skewers were made up of these perfectly cooked little cubes of lamb that barely even needed to be chewed. They were only lightly seasoned, but still delicious.

The roll was only small and I have to admit, for the price, I did expect it to be better, either way it was quite tasty. The pork was chopped into little pieces and complemented perfectly by the wild fennel. I’m not normally a fan of fennel, but this was delicious! It took be back to being a little girl when my Grandfather would pull over on the side of the freeway and literally collect the wild fennel on the side of the road. Ahhhh the memories.

My poor husband got stuck at Miss Chu for a while because they were having problems with their grills, anyway as it turns out it was worth the wait. He picked up two serves of the Crispy Hanoi Vegetarian Spring Rolls and they were deelish! They were insanely crispy and although the filling was all veg, it was full of flavour. Definitely a winning combination.

When it came time for round two, I stayed put with bubs and sent the husband off to collect the goods. He had two options – Mr Claws and Meatmother, and given I have a severe shellfish allergy, he decided to avoid Mr Claws (good choice buddy, taking one for the team, even though I know he wanted to try one of those crab rolls that everyone was raving about). He came back with the Smoked Cajun Sausage and the BBQ Lamb Cutlets at Meatmother. I have to say, these were the winning dishes for me, both were awesome.

Mmmmmmm,those cutlets. They were a great size, not the incy bincy little cutlets you can often get and they were cooked to perfection. Served with a delicious potato salad I’m calling this my dish of the night.

The sausage was just as delicious – seriously juicy and tasty! Looks like I’ll be paying their restaurant a visit in the very near future.

After a bit of a breather (about an hour and it almost didn’t feel long enough. I think I pushed my stomach to the absolute maximum!), it was time for something sweet, and if you’ve read some of my other posts or seen my instagram lately, you’ll know I’ve got a bit of a Gelato Messina obsession. Even though I was about to burst at the seams, I made my way to the Messina soup kitchen and got me some gelato. 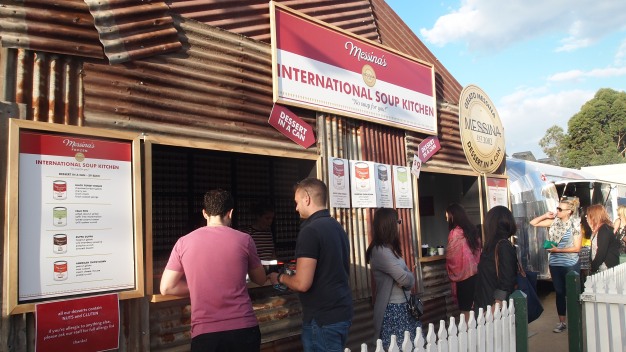 Their gelato menu, as can be expected was brilliant and after some deliberation, we settled on the American Chow Down (peanut gelato, oreo custard, cream cheese mousse and pretzel crunch) and the Zuppa Duppa (hazelnut gelato, wild strawberry preserve, pistachio crunch and amaretti biscotti).

I was supposed to share, but that was never going to happen, lucky if the husband got a couple of spoonful’s of each gelato, they were just too good to share. Both were delicious, but the American Chow Down took the cake, literally. How they came up with the idea of oreo custard I don’t know, but it was brilliant. They really need to consider adding this to their standard menu, I can’t handle the idea that I may not be able to get my hands on one of these babies again.

All in all the Royal Croquet Club was a great outing for the whole family and I’m really hoping it becomes a regular feature on the Melbourne calendar.