Brought to us by the people behind Proud Mary’s (read more about Proud Mary’s here), Stagger Lee’s is an absolute gem in the middle of crazy Brunswick Street. Situated on a street corner, if you weren’t specifically looking out for it, you’d just about miss the tiny sign on the door, but you can’t miss the other signs of a great café – the smell of coffee and the buzzing patrons, both inside and out. I’ve visited a couple of times and each new visit has been better than the last which keeps me coming back for more.

Once a week, my sister and I meet up for lunch at one of Melbourne’s great lunch spot and this week we stopped in at Stagger Lee’s. On this visit we ordered the French toast (Pretzel, Honeycomb & Salted Choc French Toast with classic vanilla ice cream) and the Mexican (Soft shell corn tortillas, charred corn, lime and tomatillo salsa, avocado, fried eggs, creme fraiche and herbs).

If you’ve been hiding under a rock for the last year you may not know about Stagger Lee’s truly mind blowing French toast. It’s the kind of dish that will change your life, no really, it’s that good. I have a massive sweet tooth, so I often order pancakes or French toast, but this one is on a whole different level. They have changed it a couple of times over the last year, and each time it just gets better and better. The current mix of pretzel, honeycomb and salted choc is a sweet lovers dream. The toast itself was super moist and tasty, add the other bits and pieces and it’s brilliant. It’s only fault is that there isn’t more of it.

I’ve also got nothing but compliments for the Mexican. I have no idea how they’ve managed to make simple old avocado, corn, salsa and an egg so damn delicious. When wrapped in a tortilla, each element perfectly complements the other, making each bite more enjoyable than the last. Definitely a winning dish if you’re not one for French toast.

So what’s the moral of this story? Stagger Lee’s is a sure thing and although it’s name isn’t as well known as Proud Mary’s, don’t let that deceive you. It’s just as good as some of Melbourne’s best. 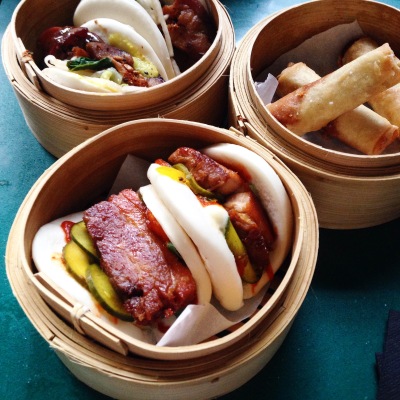 Let me set the scene, it’s a stinking hot Saturday afternoon and all we wanted is to find somewhere cool to enjoy a drink and some food. So we decided to head to Howler in Brunswick, a place that I drive past all of the time and had no idea it was there. Situated behind a carpark (right next to the St.Ambrose Hall), in what looks like an old warehouse, had it not been pointed out to me, I would have never even looked twice at it. When you walk through the large warehouse door, you find this huge space which is partially indoors and partially a massive outdoor area filled with tables, booths and a whole lot of greenery.

As it was a hot day, we decided to sit in the outdoor area and enjoy the mist that was being sprayed out of the overhead misters (I have no idea what the proper name is, but you know what I mean). Howler offers a tapas/yum cha style menu which suited us perfectly as we were there to enjoy a few drinks, and just wanted a couple of small dishes to tie us over. As it’s a bar, all food and drink orders are to be placed at the counter, so we made our way through the crowd and ordered the pork belly bao (Twice Cooked Pork Belly, Pickled Cucumber, Spring Onion, Sriracha) , the eggplant bao (Spiced Eggplant, Sweet Corn Puree, Pickled Bok Choi, Sunﬂower Shichimi) and the duck and plum spring rolls off the specials menu.

Even though it was a pretty busy Saturday afternoon, our food came out in about 15 minutes, which was great because drink number one was already going to my head (Since having my son I’ve become a super super lightweight. Talk about being a cheap date!). We dug into the pork belly bao’s first and they were delicious, a little bit on the spicy side for me, but the pork was tender and tasty. 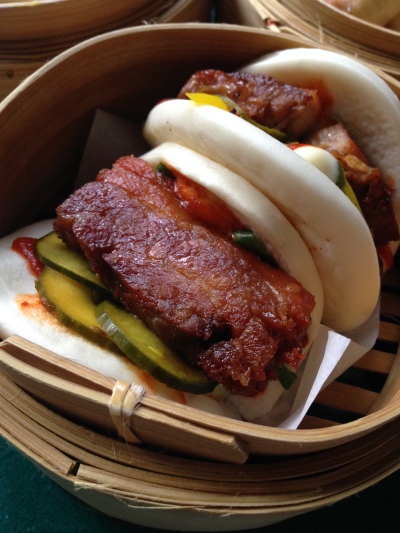 The eggplant bao also had a bit of kick to it, but that aside, it was pretty tasty, the mix of the eggplant, corn and bok choi was spot on. 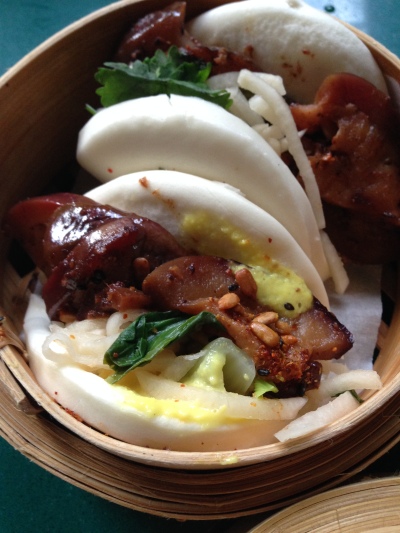 All in all Howler is a great spot to have a drink with friends and it’s always nice to have some decent food to wash down the alcohol (I definitely needed it!).