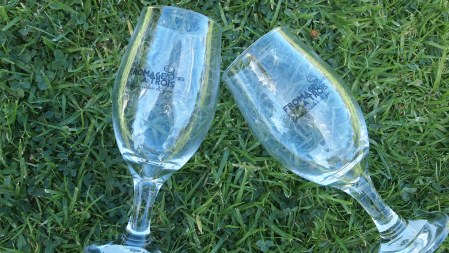 Over the years I’ve been to plenty of food and wine festivals at Werribee Mansion, all of which have been nothing short of brilliant – cue us in a rather drunken state singing along with Daryl Braithwaite. Yep I can’t remember what year it was, but it was a great day out, so naturally as soon as I caught wind of Fromage a Trois, I booked it into my calendar.

Fromage a Trois (cheese, cider and you),  one of the many events running as part of the Melbourne Food and Wine Festival, saw the beautiful front lawn of Werribee Mansion transformed into a country themed foodie heaven. We arrived mid afternoon and by that stage the festival was in full flight. There were people everywhere sitting down on picnic blankets with a cider in hand enjoying their cheese boards with friends.

The obvious downside of an event like this can be the queues for tastings, and queues there were. Many of the big ticket stands like Yarra Valley Dairy, Milawa Cheese Company and Alba Cheese had huge lines of people eager to get their hands on some great cheese. For the most part everyone seemed content to wait in queue with a cider in hand and enjoying the sun, so it actually made for a great atmosphere.

We decided to avoid the busy cheese stands and head straight to the cider stalls. We sampled all types of apple ciders – pink lady cider, granny smith cider, even a jazzy apple cider (which was awesome!). Then there were a huge array pear ciders and other mixed ciders like apple and ginger. We sampled so many different ciders that I actually started to lose track of where they came from – I know, shame on me, how do I expect to write a blog post without all of the details (To be honest, I was feeling the effects by this stage, and lets just say my attention to detail started to drop, oops!).

In the end my favourites were the apple and raspberry cider from Cheeky Rascal and an apple and mango cider that my sister picked up from Custard and Co. I don’t mind a cider or two, but never did I expect there to be so much difference in flavour and depth from brewer to brewer. It gave me a whole new appreciation for what these guys do.

After so many ciders we were in desperate need of food, so what do the girls come back with? Cheesecake, a dessert burger and some ricotta cannoli – and that ladies and gentlemen, is how I like my cheese, served sweet! The cheesecake and dessert burger (say what? It was a bread roll filled with a piece of chocolate cake, some raspberry coulis and mascarpone. Sounds random, but it worked) were good, but they had nothing on those cannoli. The good people a That’s Amore Mozzarella have more than mastered the art of ricotta cannoli, so much so that I’d say they were some of the best I’ve tasted outside of Sicily.

In need of a bit more sustenance, we made our way to the food trucks, only to find that most of them had sold out of food by 3pm. To my disappointment I missed out on goodies from the Brulee Cart and White Guy Cooks Thai,  so then started our hour long wait for bagel burgers. A few more ciders were consumed whilst in queue and by the time we actually got our food, lets just say I was past the point of no return. Although the pulled pork bagel (it was ok, but had nothing on Manchester Press, read about their bagels here) did a great job of returning a level of balance to my brain function, by that point of the day I was ready to head home and sleep it off. 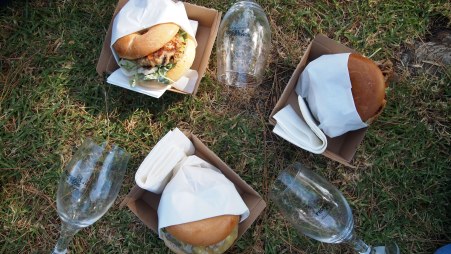 And that was the end of a great day out. I’ll definitely be back for more, I just hope a few more food trucks rock up next time. There were loads of people to be fed, and it required more than six food trucks to do the job. Beside that, a big thumbs up to the organisers for a running a very successful event.