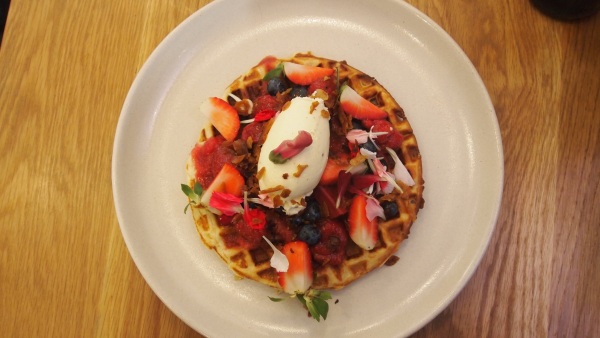 Every now and then I visit an eatery that blows my socks off and leaves a real impression on me, so much so, that I talk about it over and over and over again. One of these places was definitely Barry in Northcote (read about it here), so when I got wind that the people behind it had opened a new place in East Melbourne called Square and Compass, I added it straight to the top of my ‘places to check out’ list (which is growing faster than I can actually visit them).

Located on Clarendon Street near Freemason’s hospital, Square and Compass is standing all on its own in a relatively quiet part of town (especially on the foodie front). From the outside, the little period style house, complete with charming bay window is a stark contrast to the open, white, minimal interior, but it totally works. It isn’t a huge space, but they have managed to get a stack of seating inside without it feeling too cramped and claustrophobic.

We arrived at about 2.45pm on a miserable Sunday afternoon for a quick bite to eat to find the place packed full of dinners. Unfortunately for us, there wasn’t any space inside, so we were seated right next to a heater in the quaint courtyard out the back. To our excitement, a few minutes later, a table became available inside and we moved in to escape the cold.

Once inside, thawing out near the heater (they definitely won brownie points for putting us next to it), I had a proper chance to look at the menu and I have to admit it took me ages to decide what to eat, not because I didn’t like anything, quite the opposite, I wanted to eat everything. They’ve brought across the Californian superfood salad from Barry, which is by far the best quinoa salad I’ve tried, as well as the peanut butter and heirloom tomato toast, which sounds odd, but I’m told it’s pretty amazing. In the end comfort food won out with my mum and she opted for the pulled pork jaffle (with apple sauce, monterey jack and house made piccalilli) and I, as usual went for the sweet option in the waffles (with strawberry and rhubarb compote, vanilla crème and brandy snaps).

The girl sitting next to me was enjoying her waffles while I was waiting for mine and they looked so good, I was tempted to lean across the table and steal it from under her. Fortunately our food came out really quickly and I didn’t have pinch anyone else’s food. The waffle was presented beautifully, it was bright, fresh and looked delicious. It had the perfect amount of crunch to it which worked well with the softness of the poached rhubarb and vanilla crème. It wasn’t an insanely sweet dish, so it’s well suited to those of us with a sweet tooth and those with a more savoury pallet.

The jaffle was also really tasty. The simple toasties was filled with beautifully cooked pork which came apart easily and literally melted in my mouth. 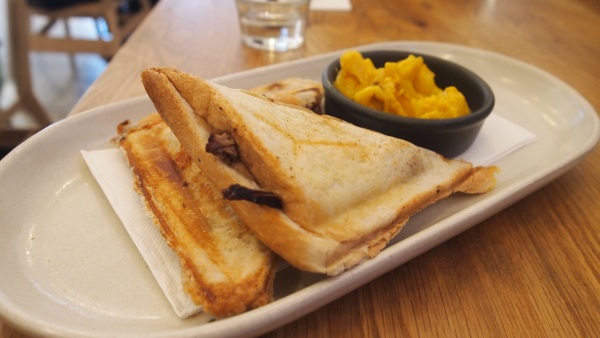 All in all I quite liked Square and Compass and one things for sure, it’s guaranteed to top the (non existent) brunch market in East Melbourne.

2 thoughts on “Food – Square and Compass”